Earlier today I went to see the film The Invisible War which is a groundbreaking investigative documentary about one of our country’s most shameful and best kept secrets: the epidemic of rape within our US military. The Invisible War won the 2012 Audience Award at the Sundance Film Festival. It is a difficult film to watch, but a very important one. It is the sort of documentary made not only to portray the world, but to change the world. In this case, change can’t come soon enough.

The numbers of rape and the military procedure post-rape are astounding and numbingly shocking. The actual statistics of the occurrence of rape, both to women and men, are not entirely available as those who report being raped are typically discharged as well as often charged with another offense, such as adultery – even when it was the rapist that was married, not the victim. Therefore many victims remain quiet and harbor the damage deep within their mind and soul, forever growing like a cancerous tumor. An estimated number of 19,000 women and men are raped every year with 147 being convicted of a sex crime in 2009-2010 (see chart below, numbers from the Dept of Defense). That is an estimated 0.8% (or 0.008) conviction rate. Imagine what that would be like in the civilian world….

I know, it sounds insane, but this is what is going on in our nation’s military forces.

What shocked me most was the closing line at the end of the movie…. On December 9, 2011, Judge O’Grady dismissed a lawsuit against Donald Rumsfeld and Robert Gates which was filed by 28 military members and veterans who said they were victims of sexual assault. When Judge O’Grady dismissed the lawsuit saying that rape and sexual assault in the military are simply ‘incident to service,” he put his finger on the heart of the problem. According to the military’s argument, which Judge O’Grady accepted, rape and sexual assault is just an occupational hazard for service members.

An “occupational hazard.” Rape. One of the most violent physical assaults which forever haunts and permanently scars the victim, and our military condones it by simply stating that it is just part of being in the military. As if it is a wolf-whistle from a group of off-duty men at a local bar eying an attractive woman. The definition of an occupational hazard is a risk accepted as a consequence of a particular occupation. Occupational hazards of serving in the military are incidences such as pulled muscles, broken bones, IED’s, gunshot, no sleep, sleeping in a trench, being taken hostage, poor rations, rationing water, no showers, no toilets, and the list goes on and on. All of these items are out of control of your fellow man or woman which is serving right next to you. All except for rape.

Just look the other way.

In wrapping this up, I would like to note that I have met and personally know several military personnel and veterans alike who would just as soon put out their own eyes with a red-hot poker than they would violate and rape another human being. There are a significant number of honorable men and women serving… many more non-rapists than there are rapists. However, even one rape should never be tolerated under any circumstances. Is this an acceptable “trade-off” for many of those serving to protect our country? It appears so. There is no honor in rape. Now every time I see or talk to an enlisted man or woman who I do not know, I will always wonder if they have either been a victim of rape, or have been the rapist. I hope neither.

Bravo to those women and men who have come forth to help fight with enemy within. 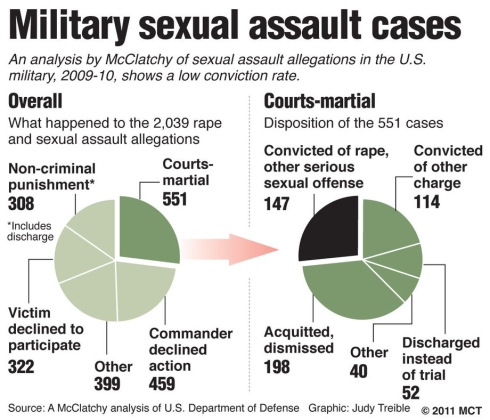