Today was to be my day of catching up on some doggie graphic work and some new websites, but I keep coming across more and more websites and publishings about the war the GOP has declared on Women’s Rights. One minute I want to scream to everyone the unrighteousness behind these bills. Then the next minute, I want to pack up myself and my dogs and move into a cave in the Northern Territories – with high speed internet, of course. I’m sure I can find a cave, but since I seriously doubt I’ll find one with high speed internet, or even in an area where a wireless card will work, then I must do the former of the two options.

Many Republicans are refusing to believe (or admit is probably more like it) that there is a war against Women’s Rights. For those who just don’t “get it,” just take a look at some of the images and graphics below. Now, pass me some honey tea as I’m sure my throat is going to be sore after I finish screaming at these troglodytes who are attempting to turn our democracy into a theocracy.

First are a series of tweets by Senator Barbara Boxer (D, CA). Be sure to check out her twitter feed. There are a lot of useful and informative links there as well.

One of Sen. Boxer’s tweets (not above, but on her twitter feed) led me to the site from Planned Parenthood called “Women are Watching.” Phenomenal site which has a category of daily reminders that “the attacks on women’s health are a figment of your imagination.” Here are a few of the reminders:

05/03/2012:  Georgia Governor Nathan Deal signed an extreme ban which places severe limits on when women can get abortion care – with no exceptions for rape or incest.

05/04/2012:  Governor Sam Brownback in Kansas is set to sign a bill that would let clinicians, doctors, or any individual or institution deny a woman care if they “reasonably believe” the use of a drug would end a pregnancy.

05/02/2012:  Louisiana already requires a women seeking abortion to undergo a government mandated ultrasound, but apparently that wasn’t enough. A new provision makes the mandate even more extreme by requiring it to be audible.

05/01/2012:  If you are an educator in Tennessee, beware of what you’re teaching kids—it might cost you $500. An “abstinence-only” bill set to be signed by the Governor would ban teachers and groups from promoting “gateway sexual activity.” (Does holding hands count?)

04/26/2012:  Today’s daily reminder that the attacks on women’s health are just a figment of your imagination begins in Arizona, as lawmakers pass bill to ban Planned Parenthood Funding. 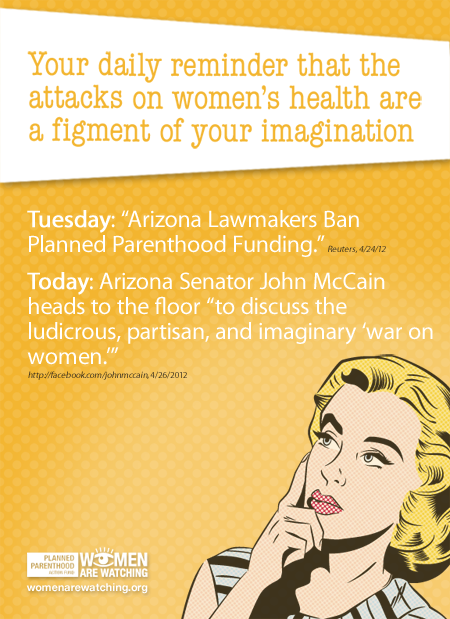 04/25/2012:  In Arizona, Governor Brewer is set to sign a bill that would ban the use of public funds for Planned Parenthood in the state.